Happily Ever After (Unreleased) 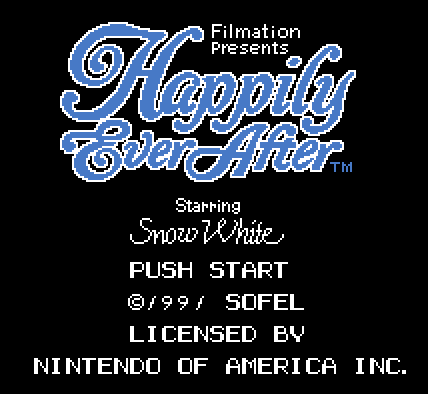 software
Happily Ever After (Unreleased)

"Happily Ever After", an unreleased game for the Nintendo Entertainment System.
Meant as a videogame tie-in from the ultimately poor-performing movie Happily Ever After (previous name: Snow White and the Seven Dwarfelles), this unreleased game was advertised and previewed in multiple locations before being discovered in Texas.
From the excellent article by NintendoPlayer.com:
In the September 1990 issue of Nintendo Power, the magazine repeated “gossip” it heard at the Consumer Electronics Show that a Nintendo Entertainment System title based on Happily Ever After would be made by SOFEL, the Japanese developer/publisher best known for Wall Street Kid and Casino Kid, “targeting the growing female market for NES games.”
A press release sent out by 1st National Film in October stated that this Nintendo game was scheduled for January 1991. The film, meanwhile, only made it to French movie screens in 1990, due to 1st National Film’s failure to procure enough money for advertising and prints, according to the Associated Press. An application to join the NASDAQ was being prepared by the distributor, while the summer of 1991 was the new slated release date for the movie.
After January rolled around uneventfully, GamePro published a single screenshot of Snow White’s 8-bit video game in action in March 1991 with the bemused aside, “What? An NES title with a female protagonist?”Game Player’s wrote in the same month that the gaming adventure was “forthcoming” to coincide with the still unexhibited feature film.
In July, 1st National Film began trading on the NASDAQ. A company press release from the following month claimed that when the Nintendo game was demoed at Chicago’s Consumer Electronics Show in June, over $3 million in advance wholesale orders were placed by retailers during the four-day gathering.
GamePro updated Happily Ever After‘s release date to 1993 a few months later, remarking, “Some day her Prince will come, and so will her NES cart.”
Nintendo Power‘s PAK Watch Report from the Winter Consumer Electronics Show in Las Vegas informed readers that SOFEL was still showing the game. GamePro elaborated that it would be available in June 1993.
It is not known whether the poor ticket sales or the long delays contributed to its cancellation, but Happily Ever After didn’t have a happy ending on the Nintendo Entertainment System–it quietly disappeared like so many other unreleased games. In July 1993, however, 1st National Film signed an agreement with American Softworks Corporation to create a next-generation title for the Super Nintendo and the SEGA Genesis, the former of which was shipped in 1994.
The Hitachi erasable and programmable ROM chip containing the game’s program data was manufactured in the eighth week of 1991, placing the creation of this prototype sometime after that date.
The Nintendo Entertainment System game picks up after Lord Maliss kidnaps the Prince and sends Snow White fleeing into the forest, only this time with Blossom, one of the Seven Dwarfelles, endowing her with special flower powers that are on loan from Mother Nature.